One of Prescott’s most famous landmarks celebrated the completion of 100 years of operation February 1, 2011. Though it sits atop a bluff overlooking the heart of the city’s downtown business area, you just might be surprised how almost anonymously it has gone about caring for hundreds of Arizona’s citizens. Since opening in 1911, an estimated three thousand plus residents have received a “century of caring,” according to registration archives.

Except for a colorful 1947 Life magazine article, mostly about the male residents, the Home has gone on quietly about its mission of providing a safe sanctuary for Arizona pioneers in their later years who have contributed to the state’s history, be it in mining, farming, ranching, education or public service.

During 2010, Arizonans statewide were invited to join in the celebration as residents, staff, and supporters observed the century with Open Houses, displays marking milestones along the decades, and the telling of stories associated with the state’s development.

While eligible Arizona residents continue to make application at the venerable facility, the Arizona Pioneers’ Home remains unique in its eligibility requirements in the United States.  (Two other state-run Homes -- one in Alaska and the other in Wyoming exist for pioneer residents, but their admission requirements are different.)

To conclude 100 years of “quiet” caring for the state’s pioneers and miners, residents, staff and special invited guests helped celebrate the 100th birthday party of the Arizona Pioneers’ Home and Hospital for Disabled Miners.

The Home was sanctioned by the Arizona Centennial 2012 Foundation, and formally received the “Official Centennial Event” designation. This afforded the Home advertisement in State Centennial fliers and brochures, advising that two more Open Houses would be conducted (May 21 and June 18, 2011). These were open to anyone interested in visiting the Home. Tours were offered, refreshments and an opportunity to meet some of the wonderful residents of the Pioneers’ Home. 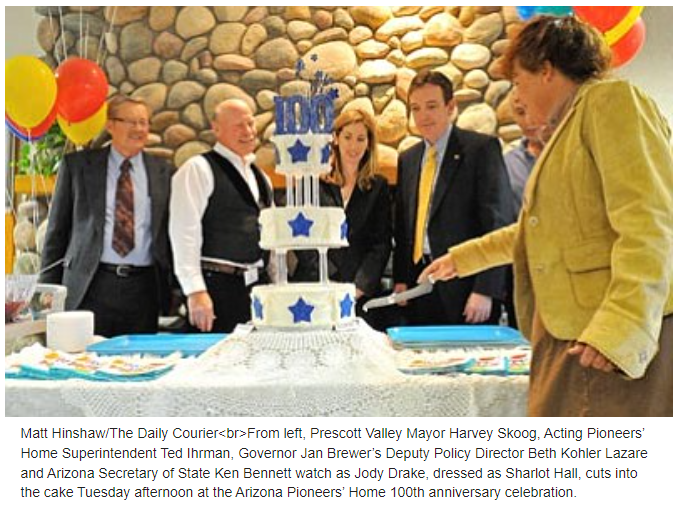